Migrant society in early Singapore was characterised by religious diversity. Immigrants from China, India and the Malay Archipelago brought their religious beliefs and established their respective places of worship. Europeans and Western missionaries set up churches, schools and printing presses. Major religions of the world were represented on the island, with Buddhism, Taoism, Islam, Hinduism and Christianity as the major religions of the population. Apart from catering to the spiritual needs of immigrants, these institutions also served as social hubs, playing an important role in people’s lives.

The various religious communities gave Singapore a rich architectural landscape. Remarkable mosques, churches, Chinese and Hindu temples were built at major thoroughfares and became important landmarks. Many historic buildings of these institutions are now gazetted as national monuments and continue to serve as places of worship or community heritage centres. 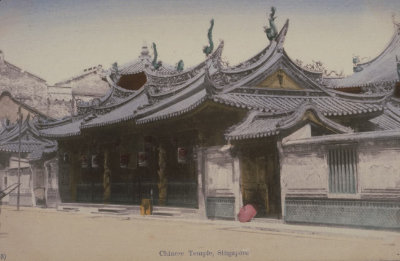 Thian Hock Keng (天福宫, ‘Temple of Heavenly Happiness’ in Chinese) on Telok Ayer Street is one of the oldest Chinese temples in Singapore. Its predecessor was a shrine dedicated to Ma Zu (妈祖), the goddess of the seas, on the shore of Telok Ayer Basin where the first immigrants landed. Upon arrival in Singapore, they visited the shrine to give thanks for their safe voyage. The present temple was built between 1839 and 1842 with donations mainly from Hokkien merchants and community leaders. 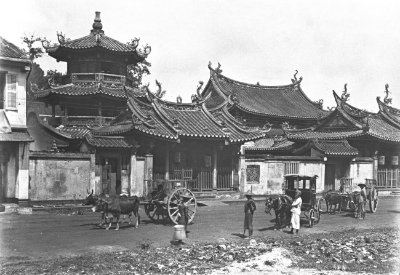 Chongwen Ge (崇文阁, ‘Institute for the Veneration of Literature’ in Mandarin), Singapore’s first Chinese school established in 1849, occupied the pagoda on the left, completed in 1852. Hokkien Peranakan merchant Tan Kim Seng spearheaded the construction of the school at Thian Hock Keng Temple with contributions from the various Chinese dialect communities. 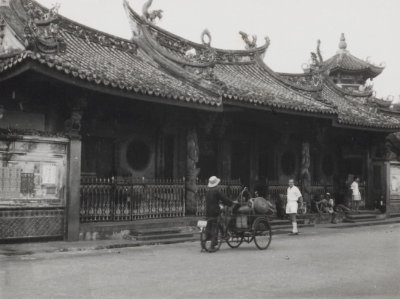 Thian Hock Keng was built by craftsmen from China in the traditional southern Fujian architectural style. In 1907, Emperor Guang Xu (光绪) of the Qing dynasty gifted a calligraphic silk scroll to the temple, which was made into a plaque. The plaque was inscribed with the Chinese characters “波靖南溟” (bo jing nan ming), which translates as “gentle waves over the South Seas”. This imperial gift was granted in recognition of the contributions made by the Singapore Hokkien community to flood relief efforts in Fujian province. 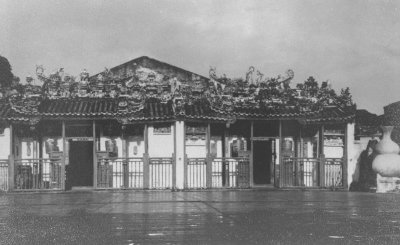 Yueh Hai Ching Temple (粤海清庙) was established by local Teochew immigrants in 1826. The present temple was constructed in the 1850s and consists of two prayer halls – Shang Di Gong (上帝宫), dedicated to Xuan Tian Shang Di (玄天上帝), the patron deity of the Teochews, and Tian Hou Gong (天后宫), dedicated to Ma Zu (妈祖), the goddess of seas. The temple is known for the exquisite statues that adorn its rooftops. In 1899, Emperor Guang Xu (光绪) of the Qing dynasty bestowed a calligraphic scroll to the temple in recognition of its contribution towards flood relief efforts in China. 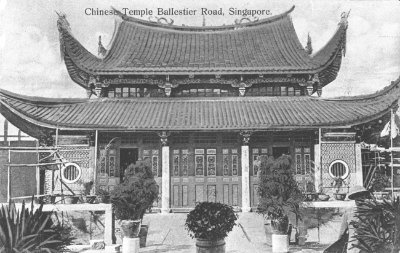 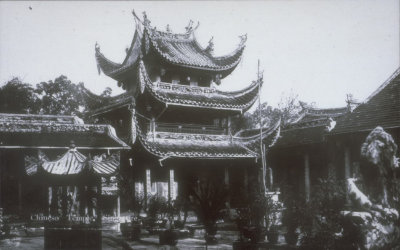 Constructed between 1898 and 1908, Siong Lim Temple (双林寺) is the oldest Buddhist monastery in Singapore. It was founded by Low Kim Pong (刘金榜), a successful merchant from Fujian, China, who made a fortune through Chinese medicine and banking businesses. Modelled after Xi Chan Si (西禅寺), a famous Buddhist temple in Fuzhou, Fujian, the temple incorporates the province’s different regional architectural styles. 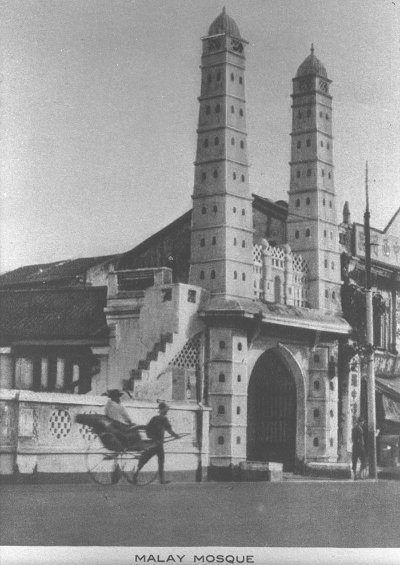 One of the oldest mosques in Singapore, Jamae Mosque on South Bridge Road was established between 1826 and 1827 by the Chulia community. The Chulias were Muslims from South India, many of whom worked as merchants, shopkeepers and moneylenders in Singapore. Also known as Chulia Mosque, the present building was built in the 1830s in the Indo-Islamic style, with distinctive twin minarets flanking the entrance. 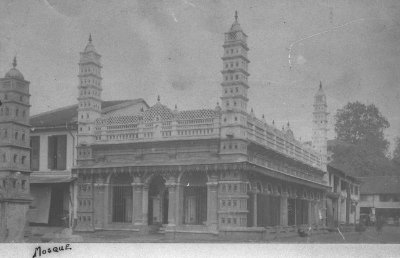 Nagore Durgha Shrine at Telok Ayer Street, dedicated to Shahul Hamid Durgha, a holy man of Nagore in South India, was built between 1828 and 1830 by South Indian Muslim immigrants. The shrine’s ornate architecture is a blend of Islamic and European elements. The gazetted National Monument is now home to the Nagore Dargah Indian Muslim Heritage Centre. 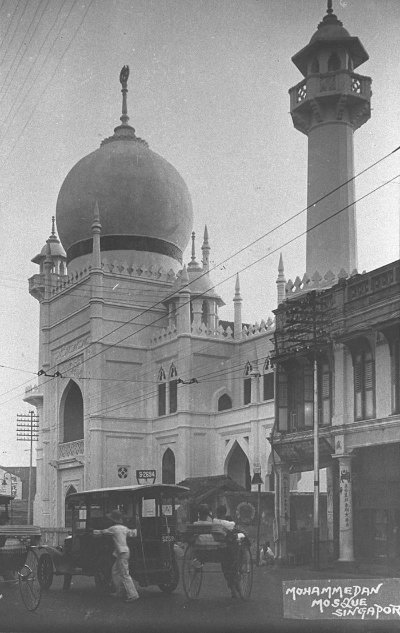 The original Sultan Mosque, located next to the Istana (palace) at Kampong Glam, was built between 1824 and 1826 for Sultan Husain Shah as a royal mosque. By the 1920s, the mosque was in a state of disrepair. It was thus demolished and a new mosque was erected on the site between 1928 and 1932. The present Sultan Mosque was built in the Indo-Saracenic style that combines traditional Indian, Islamic and European elements. 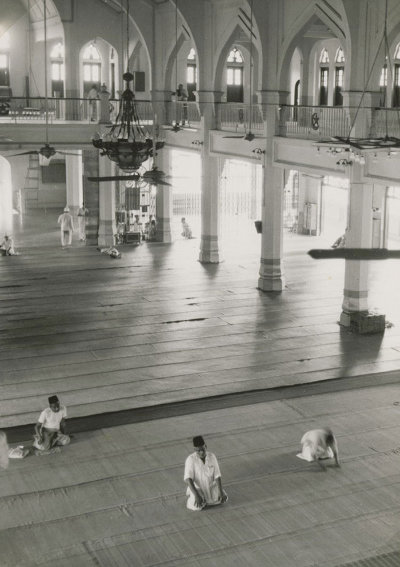 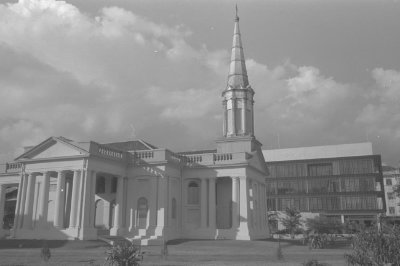 Built by the local Armenian community in 1836, the Armenian Church is the oldest surviving church in Singapore. The Armenians were among the earliest merchants and traders who came to Singapore after its founding as a British trading post in 1819. They were also the first Christian community to build a permanent place of worship here. Designed by prominent Irish architect G. D. Coleman, who built some of Singapore’s earliest public buildings, the building incorporated distinctive features of traditional Armenian churches. 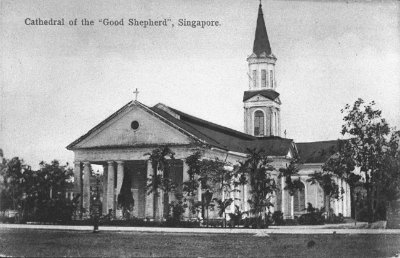 Cathedral of the Good Shepherd, 1900s

Completed in 1847, the cathedral is the oldest surviving Catholic church in Singapore. The building was initiated by a French priest, Father Jean-Marie Beurel, who obtained a plot of land along Bras Basah Road from the government. Its architecture was inspired by two London churches – Saint Paul’s in Covent Garden and Saint Martin-in-the-Fields at Trafalgar Square. It remains an important place of worship and is the Cathedral Church of the Roman Catholic Archdiocese of Singapore. 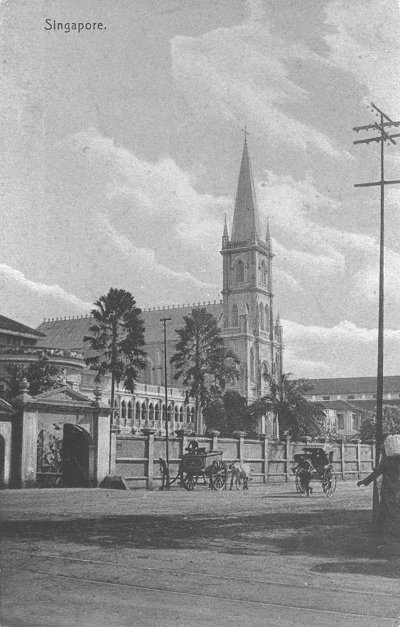 Chapel of the Convent of the Holy Infant Jesus, 1900s 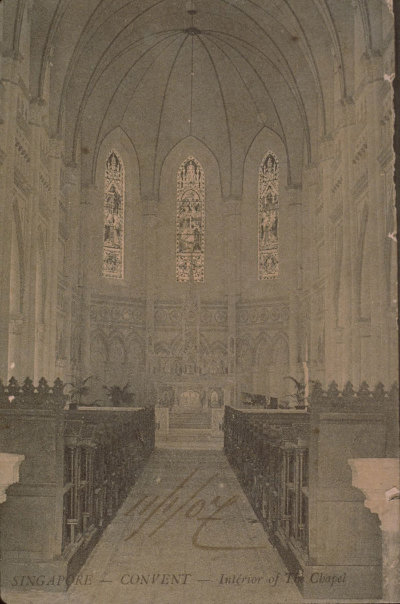 Interior of the Convent of the Holy Infant Jesus Chapel, 1900s 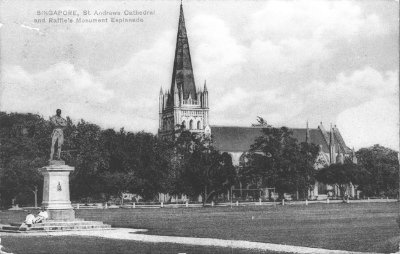 In 1823, Sir Stamford Raffles selected a site near the Padang to build an Anglican church. Named after the patron saint of Scotland, the Church of St. Andrew was constructed with strong financial support of the local Scottish community and was completed in 1836. However, the original building was struck twice by lightning and eventually demolished. In 1864, a new church in the neo-Gothic style was erected on the original site and subsequently elevated to a cathedral. St. Andrew’s Cathedral today is the oldest Anglican church in the country and the seat of the Anglican bishop of Singapore. 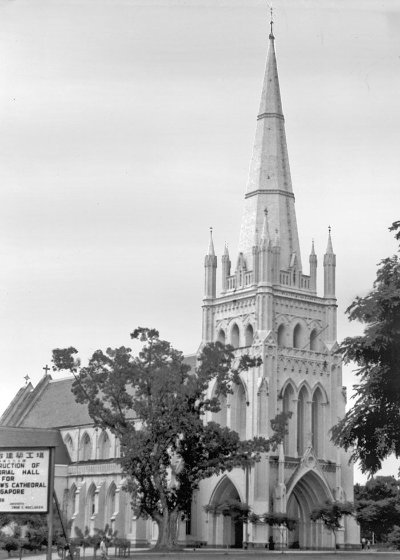 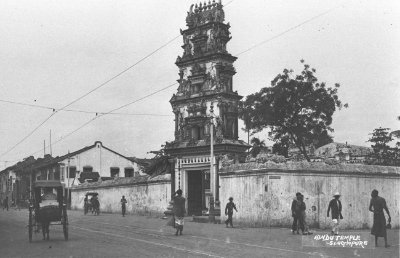 Sri Mariamman Temple on South Bridge Road is the oldest Hindu temple in Singapore. Its original wood and attap structure, built by Indian community leader Naraina Pillai in 1827, was replaced by a brick building in 1843. Much of the present building is believed to date from the 1860s. The temple also served as a refuge for new migrants from South India, who would stay here until they found work and accommodation. It remains an important place of worship for the Hindu community in Singapore. 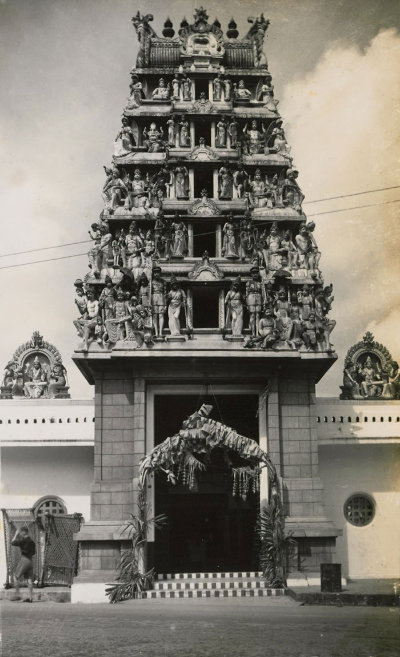 The six-tiered gopuram, or entrance tower of the temple, was built in 1925. The elaborately decorated tower featuring sculptures of Hindu deities is a landmark along South Bridge Road.