In early Singapore, people accorded great importance to the observance of customs during life events such as weddings and funerals. Often, these events involved elaborate practices and attracted spectators.

Weddings were joyous occasions in which family, friends and even the whole neighbourhood partook. Colourful and elaborate processions were common. Likewise, processions were a part of funerals, even though they were sombre events. For the Chinese, the scale of these processions, often organised at great expense, reflected the wealth and social standing of the family.

Rich in symbolism and meaning, rites of passage reinforced the traditional values or religious beliefs of the various communities. While most wedding and funeral customs in Singapore have simplified over time, some continue to be practised and are part of Singaporeans’ cultural identities. 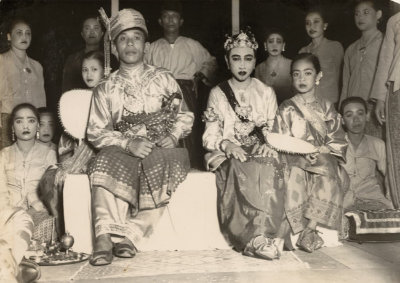 Traditional Malay weddings were generally grand events with many guests held over several days. The highlight of the wedding is the bersanding, or sitting-in-state ceremony, where the bridal couple sits on a throne placed on a dias, and is treated as king and queen for the day. During the ceremony, friends, relatives and guests offer their blessings and congratulations. 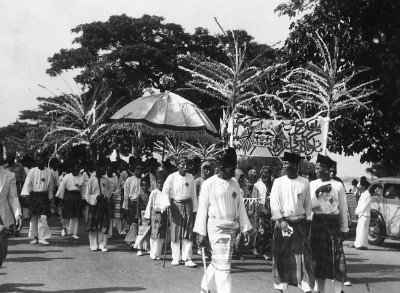 The traditional Malay wedding ceremony would begin with the groom fetching the bride from her home, usually accompanied by a kompang (Malay drum) band, bunga manggar (a decoration made from tinsel paper on a bamboo pole) carriers, friends and relatives. The band would sing verses from the Qur’an, seeking blessings for the couple, while the drumming lent an air of festivity to the occasion. 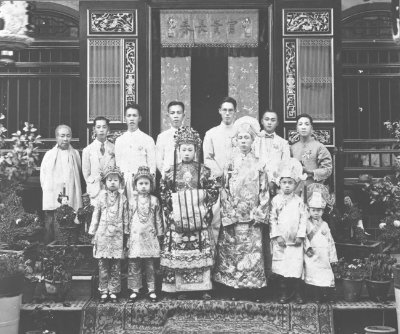 The Peranakan Association Collection, courtesy of National Archives of Singapore
19990002484 – 002

The Peranakans, or Straits Chinese, are descendants of Chinese immigrants who married local women of Malay or Indonesian heritage. Many trace their origins to 15th-century Malacca, where their ancestors came to trade and settled. The traditional Peranakan wedding largely followed Chinese traditions and lasted for 12 days, consisting of many ceremonies. 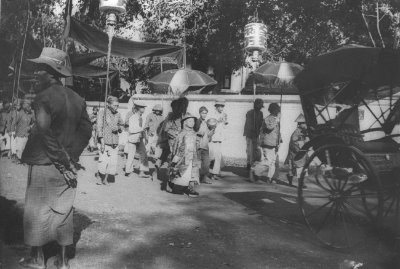 On the day of the wedding ceremony, the groom would make his way to the bride’s home, accompanied by an entourage including a pak chindek (ceremonial master), best men, page boy, musicians and men carrying umbrellas and lanterns. Important wedding rituals would be carried out, such as the chinpang ceremony, or entering the bridal chamber and unveiling the bride. 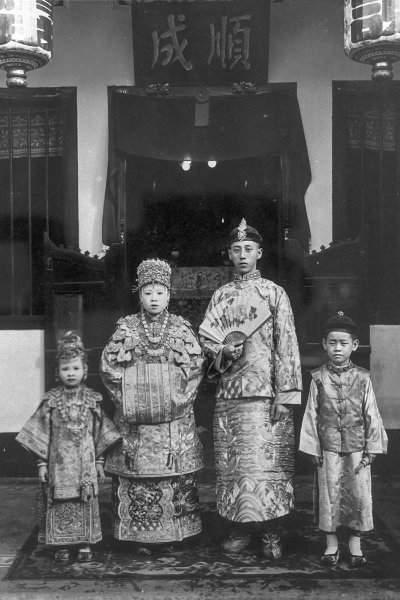 Peranakan wedding costumes feature brilliant colours and ornate decorations. The couple here is decked out in full wedding regalia and both of their outfits are exquisitely embroidered. The groom is dressed in a Chinese robe, over which a jacket is worn. The bride wears a tunic over a pleated skirt. Over her shoulder is a cape of small overlapping embroidered flaps, symbolising the feathers of a phoenix. An elaborate headdress crowns her head. The page boy and flower girl are dressed in costumes similar to what the couple is wearing. 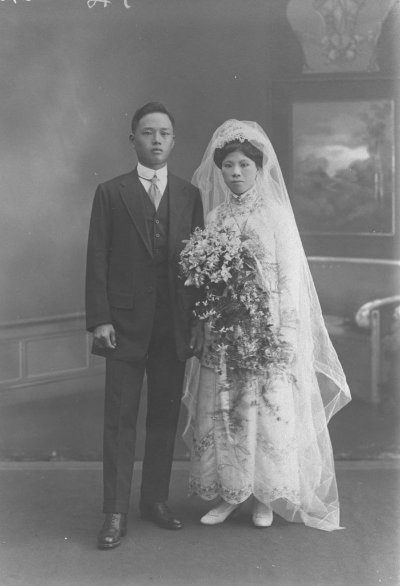 This couple’s costumes reflect Western influence on wedding customs in Singapore in the early 20th century. The groom is in a full Western suit while the bride’s dress is a Chinese-style gown topped off with a Western bridal veil. The adoption of Western wedding customs and attire in Singapore became increasingly popular in the early 20th century due to social and cultural changes, such as influence of Western education, fashion trends or Christianity. 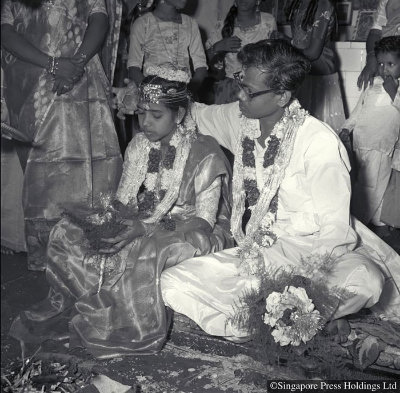 Indian wedding at a Hindu temple, 1961

The Indian community in Singapore practises a wide range of wedding customs, varying in traditions depending on the sub-ethnic group of the couple. Tamil Hindu weddings often take place in temples, with a priest presiding over the ceremonial rites. In the temple hall, a ceremonial fire is set up together with lamps, flowers and fruits. The couple would be seated at the front to receive blessings from the priest. 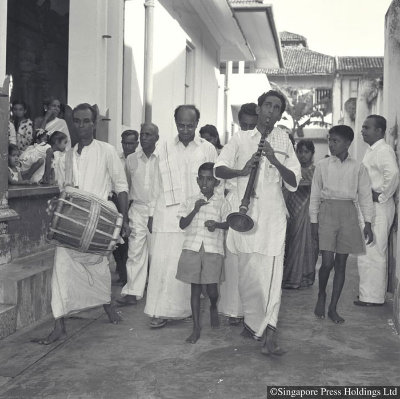 Music is an integral element of Hindu weddings. The thavil (a barrel-shaped drum) and nadaswaram (a wind instrument) are particularly popular in South Indian Hindu weddings, as seen in the image. The sound of the nadaswaram is deemed auspicious and together with the lively beats of the thavil, they produce joyous music that celebrate the occasion. 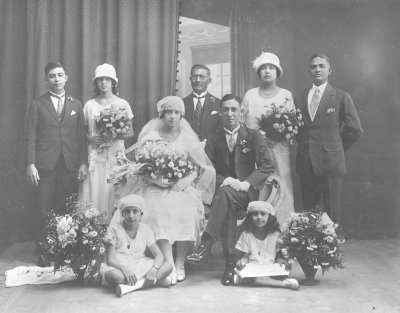 Eurasians, who are predominantly Christian, held their weddings in churches. Seen here, the groom is dressed in a three-piece suit and the bride in a calf-length gown and full wedding veil. The other men are also dressed in suits, while the women in short-sleeved dresses and hats, which were fashionable in the 1920s. The two flower girls’ outfits are complete with headdresses. 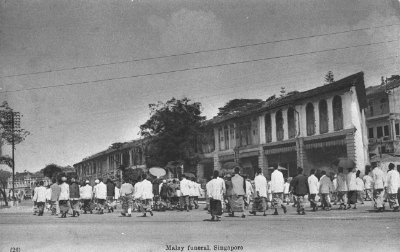 Traditional Malay funerals, which follow Islamic rites in accordance with syariah (religious laws), were solemn and dignified affairs. During the funeral procession, family members and friends of the deceased, dressed in white or dark-coloured clothes, would accompany the hearse and walk quietly to the burial site. 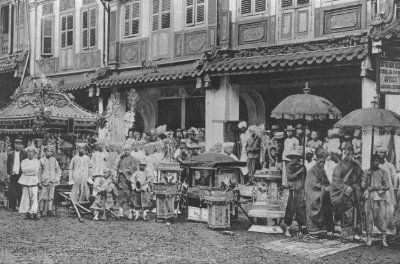 Funeral rites were an important part of Chinese social life. They reflected the virtue of filial piety as well as the belief in the afterlife and a continued relationship between the living and the deceased. The funeral shown in this photograph is probably that of a wealthy Peranakan family. Straits Chinese funerals were usually elaborate affairs with a large procession and a richly decorated hearse. 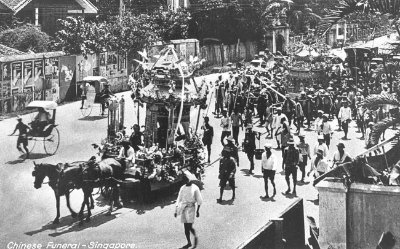 In this elaborate funeral cortege, the hearse is drawn by two horses and accompanied by a band of musicians, the deceased’s immediate descendants, other family members and friends. 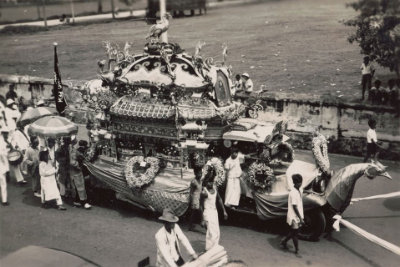 In a traditional Hindu funeral procession, the deceased’s family and friends would follow the hearse as it makes its way to the crematorium. Seen here, the elaborate hearse is decorated with intricate carvings and numerous garlands. The route the cortege takes typically passes places of significance to the deceased.