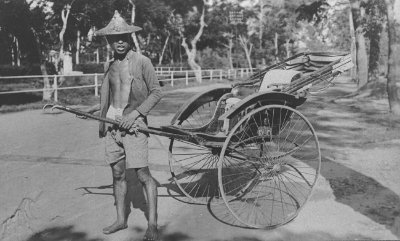 Rickshaws, also known as jinrikishas or jinrickshas, were imported from Japan via Shanghai in the 1880s. Consisting of a small lightweight cart with large wheels pulled by a single man, these carriages were a common means of transportation throughout the 19th and early 20th centuries. Rickshaws were popular as they were an inexpensive mode of transport, ideal for short journeys through crowded inner-city streets. 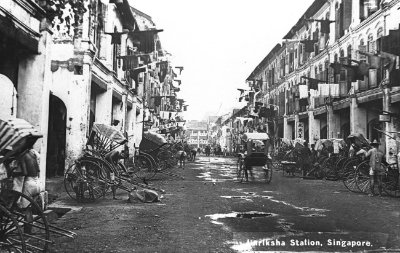 Rickshaws and shophouses in Chinatown, 1910s

Seen here is a street in Chinatown, where many Rickshaw pullers typically lived in tiny cubicles in shophouses. Requiring physical labour and no special skills, rickshaw pulling was the primary source of income for thousands of Chinese immigrants, the majority of whom were uneducated. Henghua and Hockchew immigrants from Fujian, China dominated the rickshaw trade from the late 19th century. 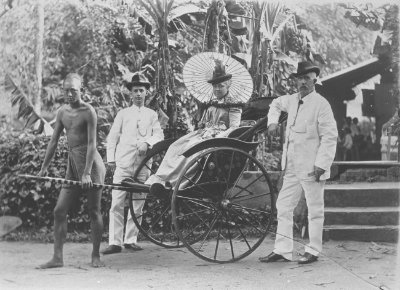 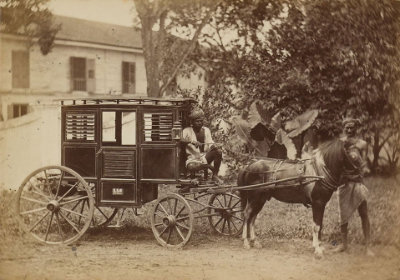 Horse-drawn carriages were a common sight in Singapore in the 19th century. The early equivalent of a private-hire car, they were typically used by the wealthy. Smaller carriages were later used for public hire, much like the taxis of today. Known as “hackneys” or “gharries”, they crowded the streets in the business areas of town. 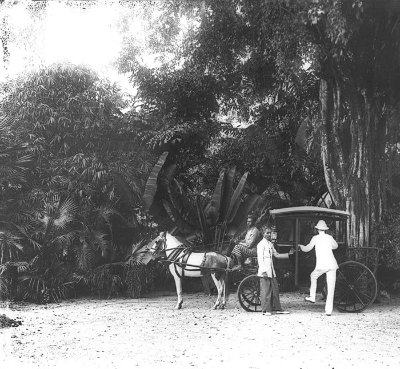 In 19th-century Singapore, taking an evening ride in one’s carriage around town, especially at the Padang and Esplanade, was a popular leisure activity for the well-heeled. 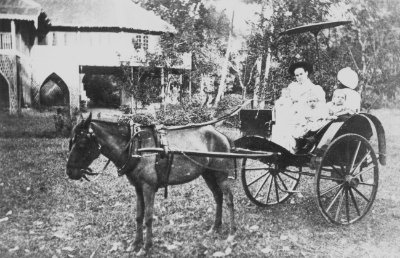 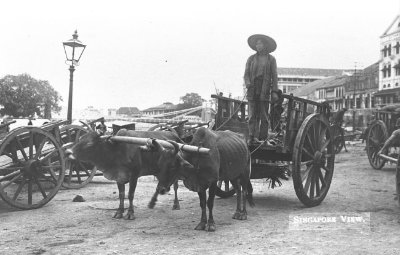 Bullock-drawn carts were one of the earliest modes of transport in Singapore. Primarily used for carrying goods, they were also used to transport refuse in the 19th and early 20th century. 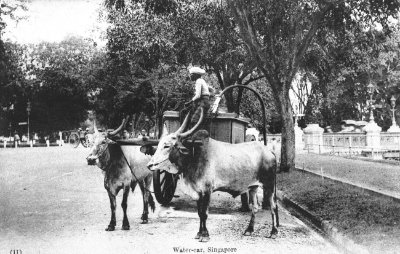 Bullock carts were also used to transport water. The place name for Chinatown, Kreta Ayer, translates to “bullock cart water” in Malay, draws from the bullock and ox carts that used to ply the streets carrying water to the early inhabitants of Singapore. Apart from domestic and commercial use, water was also used to settle dust raised by vehicles in the town’s streets. 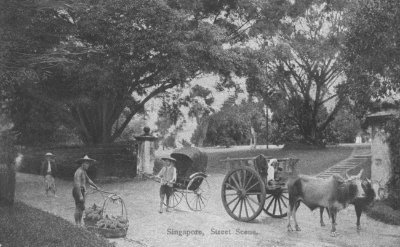 Rickshaws and bullock carts were popular modes of transport in early Singapore. The use of bullock carts began to dwindle in the late 19th century with the introduction of mechanised transport. Rickshaws continued to be popular until they were replaced by bicycle-run trishaws in the 1940s. 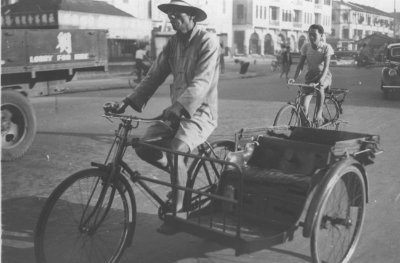 The trishaw, which was introduced during the Japanese occupation (1942–1945), consists of a bicycle with a sidecar, powered by the cyclist. Compared to the rickshaw, it was a more efficient mode of transport and rose in popularity throughout the 1940s and 1950s. With the growth of motorcars, by the late 1970s, trishaws had become a service largely catering to tourists.

Ministry of Information and the Arts Collection, courtesy of National Archives of Singapore
19980007239 - 0115 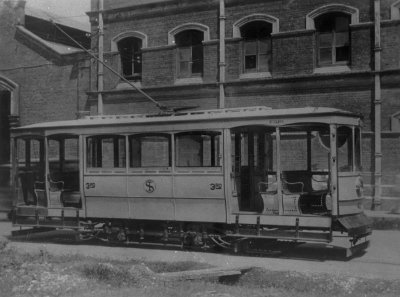 Launched in the 1880s, trams were one of the earliest modes of public transport in Singapore. The first trams were powered by steam. Electric trams were introduced to Singapore in 1905, with six tramway lines carrying passengers and cargo through the town. Despite heavy competition from rickshaws and bullock carts, trams carried an average of 11,000 passengers a day at the height of their service. 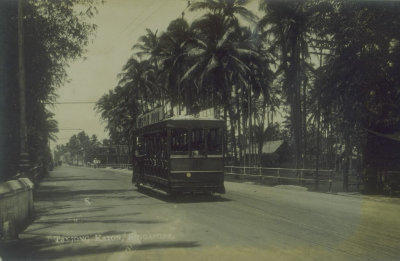 In 1902, municipal authorities passed the Tramways Ordinance, giving Singapore Electric Tramways exclusive rights to construct, equip and operate the island’s tram system. On 25 July 1905, the first car moved out of the MacKenzie Road depot, bound for Raffles Hotel. However, electric tramcars were eventually phased out by trolley buses in the 1920s. 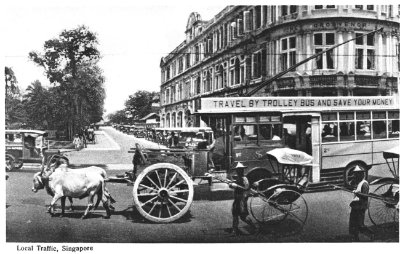 Traffic at the junction of Hill Street and Stamford Road, 1920s

Trolley buses were the first local bus services introduced by the Singapore Traction Company in 1929. The firm operated omnibus and trolley bus services that replaced electric trams. Similar to trams, trolley buses received power from overhead electric wires, but did not run on tracks, allowing them to manoeuvre around obstacles. 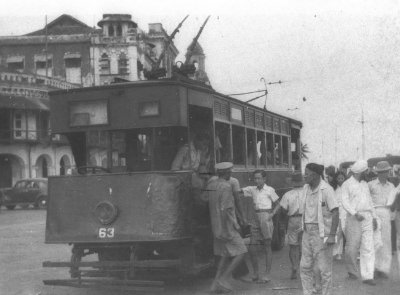 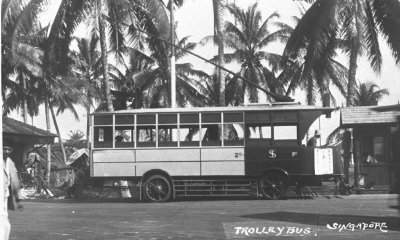 Trolley bus services began in 1929. After the Second World War, they were gradually replaced by motorbuses and finally ceased operation in 1962. 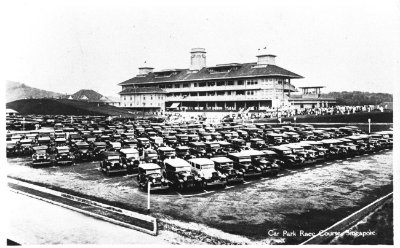 The first motorcar was brought into Singapore in 1894. It likely started a craze among wealthy automobile enthusiasts on the island. Cars only entered the consumer market in the 1920s, after the introduction of mass-producing assembly plants. From then on, the ownership and use of motorcars grew exponentially, replacing horse-drawn carriages by the 1930s. By 1940, there were over 11,000 private cars in Singapore. 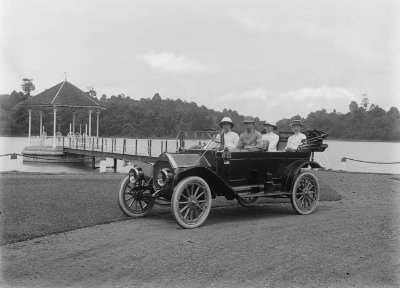 In the early 20th century, cars were marketed as a luxury good and a symbol of wealth and prestige for privileged customers. Only the elite in Singapore could afford car ownership and go on outings in their vehicles, like the group photographed here. 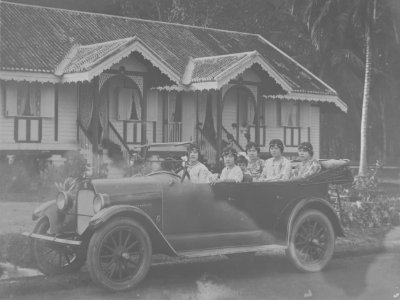 The Peranakan Association Collection, courtesy of National Archives of Singapore
19990002486 - 025

Women driving cars, as seen here, was a rare sight in early Singapore, and indicated the high socioeconomic status of the group. 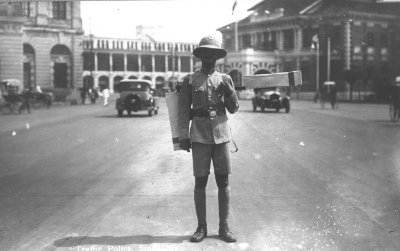 The first traffic laws in Singapore were passed in 1911, the same year a special traffic police department was established. As the number of motorcars on the roads increased in the 1930s, traffic policemen became more important on the roads. Many of them could be seen in their distinctive uniforms directing traffic at busy road junctions. 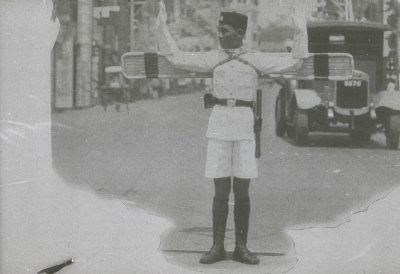 The early traffic police wore distinctive uniforms comprising a white long-sleeved shirt with white shorts and knee-high black boots, along with a hard hat and white gloves. Traffic police also carried a baton and long rectangular-shaped rattan boards on their backs, which helped them to direct traffic at road junctions. 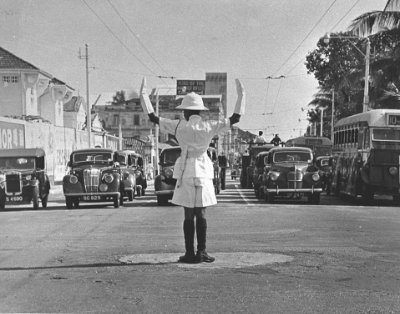 A traffic policeman guiding vehicles at a junction, 1950s 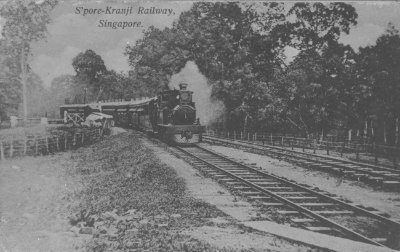 The Singapore-Kranji Railway, also known as the Singapore-Johor Railway, opened in 1903. Its construction was supervised by the Federated Malay States Railway (FMSR), which took charge of railway operations in Singapore from 1918. 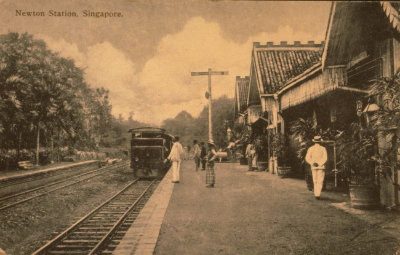 The Singapore-Kranji Railway opened in 1903 and ran between Tank Road and Kranji, with five stations along the line: Singapore (later renamed Tank Road), Newton, Cluny, Bukit Timah and Woodlands. An extension to the wharves in Pasir Panjang opened in 1907 and more stations were added to the line. 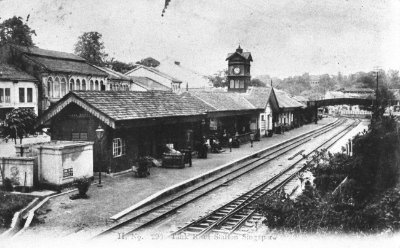 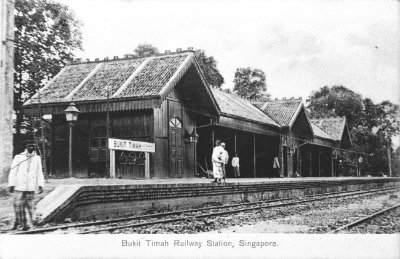 Bukit Timah railway station comprised simple, unadorned brick buildings with gable roofs. Together with the Alexandra and Tanglin Halt stations, the Bukit Timah station serviced the suburban areas of Singapore. In its later years, the station operated mainly as a freight interchange. 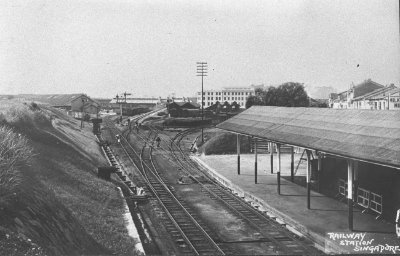 Located along Keppel Road, Tanjong Pagar railway station served trains operated by the Federated Malay States Railway (FMSR) that ran between Singapore and Malaya. The building opened in 1932 as the terminus for FMSR’s West Coast Line. The station was located directly opposite the Tanjong Pagar docks, which made the transfer of cargo between steamships and railway trains much easier.

Tanjong Pagar railway station was designed by leading architectural firm Swan & Maclaren. The building was inspired by railways stations in Europe and incorporated Art Deco and Neo-Classical elements in its design.