Originally known as Commercial Square, Raffles Place was designated as the business district of Singapore by Sir Stamford Raffles in 1822. Originally a swampy area, a hill had to be levelled to fill and construct the square.

The proximity of Commercial Square to the harbour at Collyer Quay and the Singapore River – the lifeline of Singapore’s entrepôt trade – gave rise to banks, trading agencies, shops, godowns (warehouses) and offices around the square. The imposing buildings of these commercial establishments lent an air of affluence and distinction to the area.

Raffles Place and its surrounding areas have undergone tremendous change over time. However, it remains the heart of Singapore’s financial district. 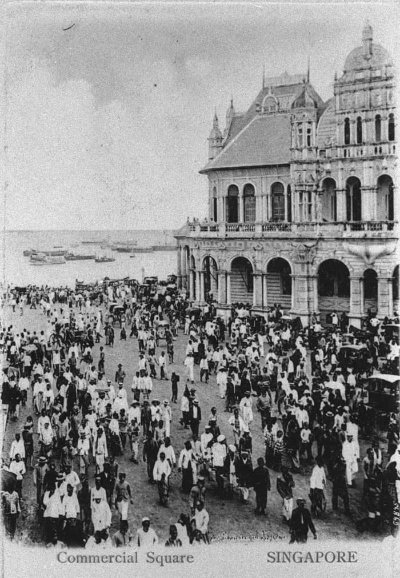 Fullerton Square was a busy thoroughfare that connected Collyer Quay – once the landing point for ships to unload and store their goods, and for passengers to disembark – to Commercial Square (later known as Raffles Place), the business hub of early Singapore. The Hongkong and Shanghai Bank building is visible on the right. 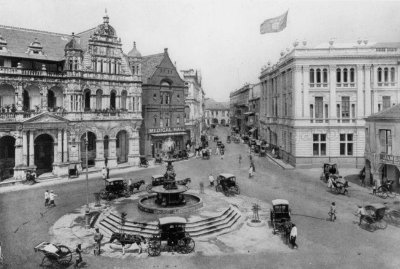 Seen here is the Tan Kim Seng Fountain at Fullerton Square. The Victorian-style structure was built in 1882 to commemorate the prominent merchant and philanthropist’s contributions to Singapore’s waterworks. Leading away from the fountain is Battery Road, which connected Collyer Quay to Commercial Square, making it one of the busiest streets in Singapore in the 19th and early 20th centuries. 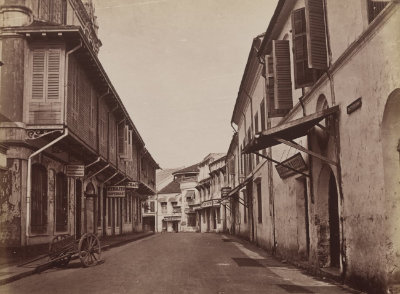 The mercantile community on Battery Road was made up of mainly European merchants and traders. In the late 19th century and early 20th century, the street was lined with three-storey and four-storey buildings that housed shops, offices, warehouses and banks. 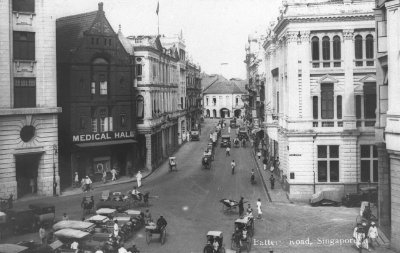 The Medical Hall, as seen on the left, was a landmark at the corner of Fullerton Square and Battery road for many years. It was also known as the Red House because of its red brick façade. Like many of the early dispensaries in Singapore, Medical Hall was opened by European doctors, in this case, by German doctor Christopher Trebing in the 1870s. The building was demolished in 1970. 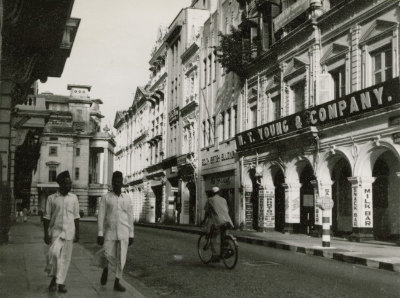 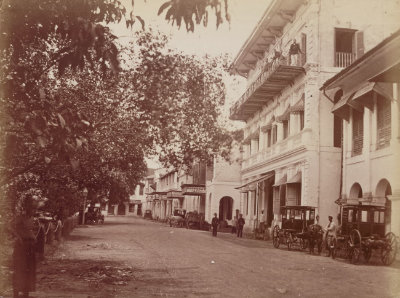 Originally known as Commercial Square, Raffles Place was designated as a business centre for the mercantile community by Sir Stamford Raffles in 1822. It was renamed Raffles Place in 1858 to commemorate his contributions. 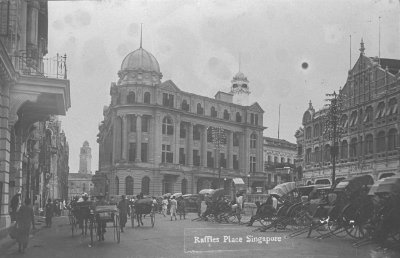 In the early 20th century, Raffles Place was a bustling commercial area with never-ceasing traffic, bordered by imposing buildings that housed banks, offices and department stores. Seen here is the Chartered Bank building in the centre and the façade of John Little, the oldest department store in Singapore, on the right. 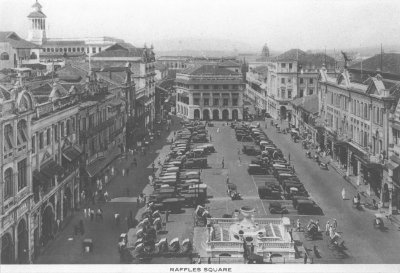 The square of Raffles Place was originally a garden before it was turned into a carpark in the early 1900s, with the Mercantile Bank building located on its southern end. On the right of the image stands the Raffles Chambers, with its distinctive statue of Eros that adorned its façade. Built in 1912 to house the retail store of Katz Brothers, it would go on to become the home of leading local department store, Robinsons & Co., which moved into the building in 1941. 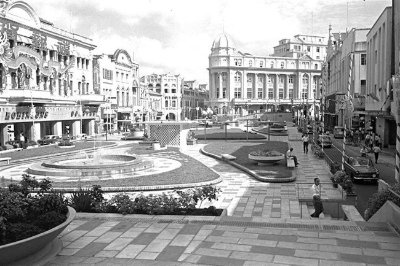 Ministry of Information and the Arts Collection, courtesy of National Archives of Singapore
19980005179 – 0082